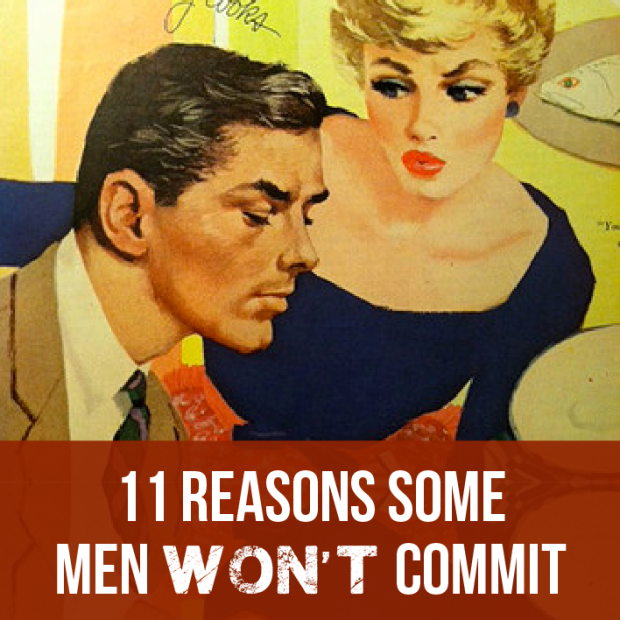 (… or take their sweet time)

Question: So, there’s this guy that I’ve been getting close to over the past few months and I’ve begun to wonder. Why is it taking so long? By no means do I want to move fast; I prefer to know the man before I consider dating him. But some days it seems like he has no interest in me and other days it’s like I’m a princess. What’s the deal? – Lisa

Men are pretty confusing.  They move slowly in relationships for all different types of reasons, so instead of me just guessing one, I’ll give you a bunch.

This type of guy won’t commit in a relationship because his heart is broken and it hasn’t healed.  He’ll call you up one day and show you an amazing time, but barely talk to you the next day.  This can be very confusing and irritating for the girl casually dating him, but for him it makes sense.  He wants to prove to himself he’s moved on but the truth is he hasn’t.  So, he goes out with a girl, has a good time, and then goes home and thinks about his ex.

Men typically need to date to get over an ex-girlfriend. It’s how they survive. They’re too manly-man to confess how they’re truly feeling, so they do everything possible to appear happy and “over her.”  They’ll date, hang out with multiple women, have fun, but then go home and sulk.

This guy just needs time.  He’ll be ready in a few months.  I recommend giving him space, because if you’re not helping him forget his ex, chances are you’re probably not the right girl for him.

This guy had his heart broken in the past or watched one of his parents go through a heartbreak.  He has sworn to himself that he won’t let himself get hurt. So, he moves very slowly in relationships.  He protects his heart and won’t allow anyone in out of fear.  In return, this causes him to push women away because he seems “disinterested.” With this kind of guy, you just need to take your chances.  You could end up heartbroken but there is a good chance that you’ll end up one happy girl!

Take your chance by being forward with your feelings.  He needs to know you’re interested, present, and “all about him.”  9 out of 10 times, these words of affirmation will drop his guard and he will become more comfortable with you.  Once this happens, you’ll be happy you stuck around.

He’s Never Been in a Serious Relationship

Like a baby taking his first steps, he’s taking his, too.  If a guy has never seriously dated before, he probably doesn’t know how to move the relationship forward. There is a pretty good chance he doesn’t know how to ask you to be his “girlfriend” – forming that question may feel very awkward for him.  I mean, I’m a woman, but I can only imagine how hard it would be to have the responsibility of giving the “let’s move this relationship to the next level” speech— I would chicken-out.  I just couldn’t do it. That’s why I’m so blessed to be a woman!  There are so many fears that come with asking a girl to be your girlfriend, for instance: what if she declines? What if she says, “I’m not in the place for a relationship” or “I like what we have right now and don’t want to ruin that?” There are so many what-ifs! So, in this case, just secretly put on the pressure. Have one of your obnoxious friends walk up to you and say, “is this your boyfriend?” Look uncomfortable, but do not answer the question.  Everyone will feel so awkward and he’ll be forced to bring it up later that night. (Or you can just bring it up later by saying “That was awkward, but that’s a good question, what are we?”)

** One other side note, some guys who haven’t dated before always feel like they’re “bothering you.” So, they don’t call or take initiative as much as they should. Sometimes you just need to make it clear that you want to see him!

Some men, aka smart men, don’t want to move a relationship forward unless they know it’s serious. How do you get serious? Quality time.  I recommend going on a long walk together and finding a bench. Talking alone in a romantic setting always leads to a conversation about feelings, dreams and aspirations. This is very important. Sometimes couples enter relationships without ever really emotionally connecting.  Sure, you’ll connect with surface conversation and kissing, but a relationship should be so much deeper than that.

How can he take you seriously unless he really knows you and you really know him? Let your guard down.

Some guys treat the dating process like an interview. (If he wants to be a CEO or the president one day, he can’t have his wife giving him a bad name!)

There is nothing wrong with a bit of caution, especially if this guy cares greatly about his future. He just wants to make sure you’re right for him before he puts a title on it. Don’t be surprised when he wants to know all about your faith, family, friends, goals, aspirations, etc.

He needs to make sure you won’t slow him down and will fit into his life. Call it selfish, but he has goals, and I’m sure he doesn’t want to give them up for a woman – just like you probably don’t want to change your goals for a man.

A guy like this cares greatly about what his friends and family think. He needs to know you won’t embarrass him – He’s looking for pure class.

I know this could make a lot of women angry, so if you’re dating a man like this, and you’re fuming, it’s time to move on with your life.  It takes a special woman to suit this kind of man.

Waiting for His Wife

Some men refuse to hand out labels like “girlfriend” because they just don’t believe in it.  They think you should only seriously pursue one woman—the woman you want to marry.  I’ve met a lot of Christian men who think this way.

A guy like this takes his sweet time getting to know a lady. They basically act like a best friend. This is the most confusing person you could ever date! But there is a bright side! This guy, once he commits, you should expect a ring by spring. He’s serious!

He doesn’t want a relationship with you but he will keep you around for as long as he can.

How to spot him?  Here are some easy pointers:

I could go on all day…

He dates multiple women at one time and only cares about himself. He’s basically the scum of the earth, but hides it with a great body, designer clothes and a perfect smile. A guy like this will sweep you off your feet and then slam you into the ground.

If you’re wondering how to point him out in a crowd, I can tell you: he’s that handsome guy in the bar who’s trying to take you home!

This guy will offer you drinks and shower you with compliments. At the end of the night, he’ll do what any “true gentleman” would do— offer you a ride home or call a cab for two. And because he is a “gentleman” he doesn’t want to leave you alone! So, he tries to lure you into his room.  UGHHHH… Girls, please do not fall for guys like this! Actually, please do NOT ever go home with a random guy from a bar! You’re better than that!

You deserve first dates, not scumbags!

I didn’t want to start with this one because it’s depressing! This guy can’t picture himself with you. He thinks someone better will come along, but in the meantime, he doesn’t want to be alone. This guy is a heartbreaker. He might not know he is cruel (because he’s too sweet to know it) but he is.  He takes advantage of the fact that he is charming, handsome and swoons girls just to fill the time.

Just like women, a lot of men hate being single, especially if all their friends have girlfriends. So, they’ll date women with whom they do not see a future.

How do you save yourself from this heartbreak? Look for the warning signs. A guy like this avoids conversations about feelings and titles. Also, he typically won’t invite you to work events or family outings — it’s too personal.

This guy is a sweetheart.  He wants to please God and make the right decisions.  So, he patiently waits on God to bring the right girl into his life.  Then once she arrives, he takes the relationship slowly because he wants to make sure she’s the right one.

A guy like this will respect you and your body. He will put you on a pedestal and treat you like a princess – but this guy may also confuse you!

He will want to save a lot of things for his wife (and I’m not just talking about sex.)  He may want to save “I love you” for his wife. So, this guy might string you along, but right when you’re about to explode because you feel so “unloved,” he’ll drop down onto one knee and propose.

Yep, it’s confusing, but well worth it!

He doesn’t yet know what he wants. He needs time to grow and mature.  Until then, he needs to remain single. Keep his number in your phone and call him in a few years.

I hope this helped!