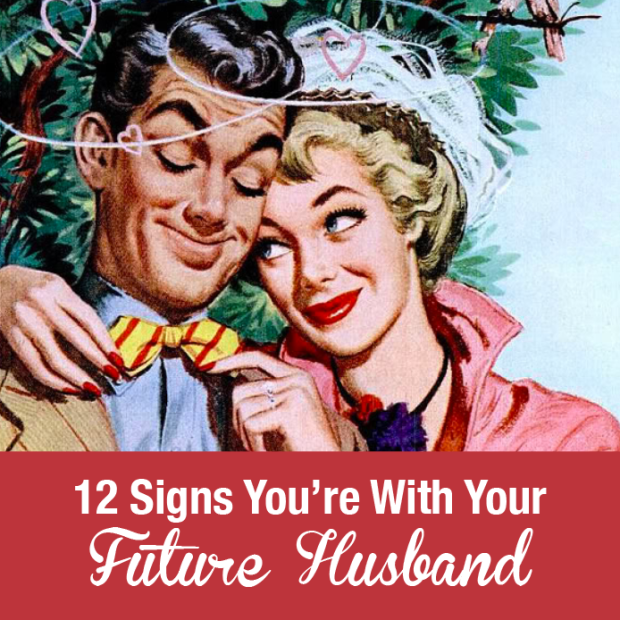 12 Signs You’re With Your Future Husband

Finding the one you’re meant to marry isn’t easy– and for good reason. Along the way, you learn, grow and figure out what you need. Suddenly, when you least expect it, you meet him. Your future husband.

I know this is hard to believe when you’re broken-hearted, crying and at the end of your dating rope, but he’s there.

I remember my last real breakup so clearly. I thought I’d lost the love of my life forever, and life would never be the same again. I even scribbled down all those dramatic feelings into a diary, but I’ll spare myself the embarrassment of telling you what it said… because guess what? It worked out. My life continued without my ex and then something great happened — I met my husband. We clicked. And I just knew…

You may ask, how do you know you’ve met “the one?”
Well, here are some ways you may know:

1. You only have eyes for him.
From the day you met him, you never had to think about marrying him, you just KNEW he was the one. You may think other men are attractive, but you don’t even consider them, because you know deep down that your man is better.  Not only will your eyes stop wandering, but your exes will be pushed to the back of your mind. Ryan who?

Guess what else ends? You stop having “what if there is someone else better out there for me” thoughts, because you are confident that your guy was made for you.

2. Communication comes naturally.
When you first started dating you didn’t feel the need to kiss the whole time that you were together, because you were more interested in talking and getting to know one another. You’re also not afraid to have deeper conversations and allow him to get to know you beyond a surface level.  One thing I’ve learned, if you’re able to communicate well with someone you barely know, it’s an early indicator that communication will always come easy. I mean come on– you survived the most awkward part!

3. You can handle an argument.
When you meet the right man, you will be able to openly discuss your problems or disagreements. You both will not want to play mind games and ignore each other for days. If you both can confront the problem head on, that’s a good sign— and let me just say, the way you each respond is a great indicator for the future. If you guys can both handle a disagreement without screaming in bitter voices, or using foul language – you’ve found a keeper!

My mother always told me: if you’re fighting within the first 6 months of a relationship, end it!  I always laughed at this, but it makes sense now. In the beginning of a relationship it should be all sunshine and rainbows, but if it’s already rainstorms and thunder — get out! You deserve the happy days before all the flaws start really coming out! And let’s get real — a relationship only runs into more problems over time, not less.

4. No Mind Games.
In high school we were taught all the mind games — When you should call, how long you should wait to respond, who you should flirt with to make him jealous, what hot picture you should post to get his attention, which outfit will make him want you, what friend you should have secretly approach him… Let’s get real here. If either people in a relationship are still playing these games, then:   A. You’re still too immature for a committed relationship or B. The relationship is making you too insecure. And honestly, you don’t want either of those situations occurring in a relationship that’s about to be taken to the next level.  When you’re with the right person, things will be flowing so naturally, you’ll forget to play those games. I promise you that.

5. You’re constantly showing each other off.
Let me clarify this, I’m not talking about posting annoying statuses or mushy Instagram pictures 24/7. That’s a bad indicator – you should be paying attention to him, not your phone. But nonetheless, you should be excited about showing your significant other off! You should want him plastered on your Facebook page or have pictures of you two in your phone (all of this within reason.) You shouldn’t be afraid to post a picture of him, because you’re worried he will think it’s “clingy.” He should make you feel confident.

Now I get it, some of you may be thinking, “We haven’t been dating long enough for all of that” Okay, that’s fine, but after a few months, a picture should at least be on Facebook, Instagram, your phone or etc. I think many women make excuses like, “Oh he is rarely on Facebook” or “Oh, we haven’t been together long enough.” If you’re with the right person, you’re going to be excited to present it openly on social media, even if that means taking the extra step to update your Facebook. And come on, this is the 21st century; let’s not pretend this is insane or irrational, this is the new NORM.

6. The friends and family are all acquainted.
When you meet the one, you can’t wait to tell your friends and family. That’s just the way it is. When you’re in love, it’s hard not to tell the world. And he should do the same. He should want you to meet the people he cares most about. Whether it’s his Mom, Dad, boss, best friend, brother, or sister. He should be going out of his way to introduce you to them. Whether it’s planning a trip or inviting you to a work event. When you’re with the right person, he will treat you like his trophy or prized possession — he’ll want to show you off and you’ll do the same in return.

7. You share the same sense of humor.
You can be yourself, goof around, and laugh and joke — and he enjoys it. He gets it, and he loves it. There’s nothing more irritating than thinking something is really funny, and Mr. Fun-killer has to come over and play the devil’s advocate and point out all the reasons why it isn’t.  You should be able to be yourself, not embarrassed of who you are when you’re having a little fun! And he should feel comfortable too.

Laughter is what keeps a relationship young and fun. If you can’t laugh together, what’s the point?

8. You’d be proud to have a son exactly like him.
Take a good look at him. Are you proud of his character? If you had a little boy and he behaved the same way as him, would you like it? Father like son is a real thing, and one day you can’t have little junior running around treating you badly. Remember that.

9. Great chemistry.
Chemistry. We hear so much about it, but what is it anyways? I describe it as an energy felt between two people. You light up when he’s around and he makes you feel different than anybody you’ve ever dated. You experience butterflies the first couple of dates, and just the feeling of him touching your hand brings a feeling of electricity through your body (poetic, but it’s the only way I know how to explain it.) You can talk to him for hours and being separated from him just feels wrong.  You’re simply drawn together. And this Chemistry, it can’t be made. It exists from the very beginning. The butterflies may wear off and the electricity may fade, but the feeling that you can’t live without one another — should last a lifetime.

10. Similar view for the future.
You’re able to discuss difficult subjects, for instance: faith similarities or differences, the amount of children you want and how you want to raise them, money matters concerning spending and saving; then there’s the fun subjects like your dreams, goals, and where you see yourself living one day.

If you both are able to discuss those topics, then agree, and be willing to bend for one another, it’s a good sign. Sometimes people get married without discussing these things, and then find out they can’t live together anymore. Sometimes love isn’t enough. You need to be willing to bend for one another and support each other’s wishes. Marriage involves giving up a lot. Are you willing to give up your dreams so that he may be able to follow his? Or is he willing to give up his dreams so you can follow yours? Are you willing to become a team and mold your lives together into something completely different than you’ve ever expected? If not, then you’re not ready for marriage, and you’re probably not right for one another.

11. He is your home.
You feel at home with him. The feeling you get when you first enter your home after a long day. He’s the first person you want to call after receiving good or bad news. You don’t mind silent moments or boring nights, because you’re together and that’s all that matters. You’re able to just hug and rest in his arms without feeling like you owe him anything physical, like sex. Life is easier with him. He accepts you and loves you for who you are, and he doesn’t break you down, he builds you up; he makes you realize how much you are capable of. He balances you and completes you.

12. He brings you closer to God.
He is a leader, brings you closer to God, and isn’t afraid to open the bible with you or to pray. He makes you a better person and cares deeply about your relationship with God. One thing I’ve learned is that marriage is difficult, but God is the glue that holds a marriage together. Without God, it may seem easy to just toss everything aside when things get tough, but with faith you know that you can survive anything.

I know this is an extensive list, and there’s a lot to take in, but this is a serious topic. Marriage is a big deal, and you need to be absolutely confident that you’re with the right person. There is a lot to consider, and if you’re missing a lot of things on this list, then maybe it’s time to realize that God has somebody else out there for you. And even if it’s painful to move on, imagine how much better it will be to move forward and stop wasting the time you could be spending with your future husband.

Now, on the other hand, if your relationship has many of the things listed, I’m excited for you! I’m pretty sure you’re with an amazing man and a keeper. Don’t let him get away, but first make sure he feels the same way. This is a two way street.

Best of wishes to you all,