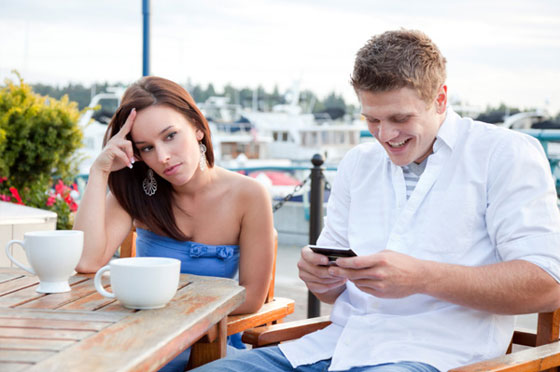 Cheating has never been easier. Your phone is at your fingertips and your ex is just a Facebook message, text message, Snapchat, or click away. And if you aren’t after one of your old flames but looking for something new, you’ve got apps like Tinder, E-Harmony, OkCupid and of course, random Facebook friends and phone numbers you’ve collected — the list goes on. Every time you pick up your phone, the nasty temptation is there … to be unfaithful.

I think there are many different levels of unfaithful, from physical, to emotional, to even a twisted level of social networking; with all these romantic nuances, how do you know if you’re being unfaithful? Well, it’s easy. Ask yourself the question: Would I like it if my significant other was doing this? Well, probably not!

Double standards are all over the place nowadays. Most people have this strange idea in their head that getting physical is the only form of cheating. I’d beg to differ — sometimes emotional cheating is more painful than the physical. Why’s that? The answer is that after you’ve been in a relationship for a while, the emotional becomes the MOST important part. Anyone can find just the physical for one night — it’s the emotional connection that’s hard to come by. And let’s be real, once you have an emotional connection with someone, physical cheating is most likely to come next.

In recent years, more and more of my friends and people I know have been cheated on; it’s become epidemic. It’s also a popular question I’m asked about. Not to mention, in the past I’ve dealt with an unfaithful ex, myself.

I sincerely feel there is no worse feeling than being betrayed by someone you really care about. It makes you feel like you’re not good enough, and even though it’s a lie, you can find yourself thinking, something must be missing in me, or he wouldn’t have done this. The truth is, it’s really the other way around – there’s something missing in him!

Also, it can be very hard to break up because you’re afraid it will make it too easy for him to run to the arms of that new lover. And because this man has come to know you, oh, so well… he knows your weaknesses, your strengths, your dreams and passions, and just what to say to make you stay. And because you’ve been spilling your guts to him in intimate moments, it feels like he has set up camp in your heart. Then, when you find out he’s been with someone else, you feel like he has looked into your very soul and decided that you’re not enough. It hurts so bad! It makes you feel like you’ve hit rock bottom at 100mph. But sometimes it’s good to hit bottom – you can only go up from there.

Of course, it’s not just the males who cheat, females are just as guilty; but being a female, I will tell you about my own experience:
My foolish story: My ex and I were together for 3 years and he never had a password on his phone, but, out of nowhere he suddenly had one. I’d been skeptical for some time about this girl, Courtney, he’d been talking to so the idea popped into my head to try her name as the password. I typed in “Cour” as the password and sure enough — CLICK, the phone opened. (First try. Bam!)
You can’t make this stuff up.

At first I cried, screamed, and got angry. But then I realized it was pushing my ex away. Then I became fearful and started going into forgiveness mode, because I thought I would lose him to this new girl. But long story short, I found out he never did stop talking to her so I finally broke it off. I wasted three months of my life, going down a dead end street.

Do you know how many times I look back and think to myself – Why didn’t I end it the moment I caught him?! How could I have been so foolish? It’s embarrassing.

I did some stupid things in past relationships, but now that I’m married to the right guy, I can see clearly that God had been trying to divert me away from those bad relationships. God had a plan and I wasn’t trusting Him. I kept trying to make terrible relationships work because I didn’t believe there was something better, or I just didn’t want to be alone. I was SO wrong.

If you’re staying in a relationship with a guy you can’t trust because he is on dating apps, talking to his exes, chronically flirting, lying to you, keeping secrets, hanging out alone with girls, or just flat-out cheating — you need to remember, this is NOT the guy you’re supposed to marry. This is NOT the guy you’re meant to be with, and you’re just wasting your precious time. Also, if you’ve discovered a pattern of dating this kind of guy, it may mean you’re dealing with low self esteem, following the example of a parent, or attracted to the rockiness and the chase, and if it’s one of these reasons, you might want to consider visiting a counselor so you can break the trend.

One thing I can promise you… if you choose to stay with someone, no matter how many red flags you’ve been given, you are stripping away not only your happiness, but your very identity and self confidence. Every day that passes by, you will feel less and less valued and less and less attractive. Each time you take him back, any sense of pride you have left will begin to crumble as you find yourself almost groveling at his feet for the love you cannot get. After awhile, you can become so ashamed that you no longer can even face your friends, and isolation may begin. No matter how many times you lie to yourself that it will all work out, it never will. You have fallen for either someone who considers you a stand-by relationship, or with someone who is emotionally unavailable. Either way, you will never be able to completely trust him again.

You deserve much more! Stop thinking that your prince charming is never going to come, he will. You’re just scaring him off with all these losers you keep around.

PS. Your dream man is not a cheat – don’t lie to yourself.