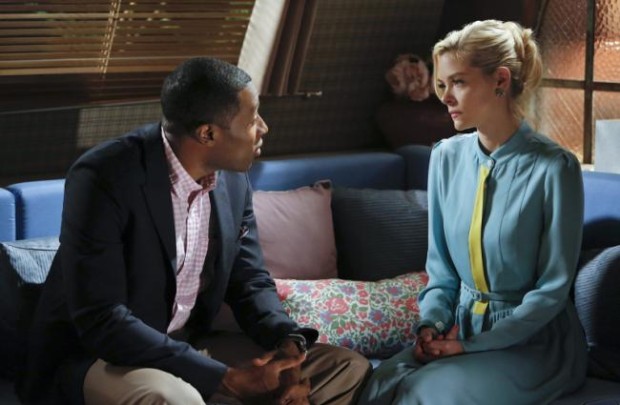 About two months ago, I broke up with my boyfriend after two years of dating.  He treated me like a princess and was my best friend.  But he was ready for marriage, and even though I knew that I wanted to marry him someday too, I still had some damage from my ex and wasn’t ready. Because of my own insecurities, I drove a wedge between us for months before the break-up. Now, I don’t know what I was thinking.  I think that I really just needed to talk about it with him, but I was afraid of hurting him. Now my insecurities seem like something far off in the past, but I did hurt him and he wants nothing to do with me. I’ve tried to explain things, I’ve said I was in the wrong, and I’ve apologized over and over again. But he still thinks that it is best for us to move on. Obviously I can’t force someone to be in a relationship with me, but where do I go from here?  How do you move on from a perfect relationship with bad timing?

I was going to write you a long explanation of a similar situation that I went through… but instead, let me tell you the ending to my story.  I didn’t marry the guy I dated for two and a half years – we broke up.  I will say though, our breakup was probably one of the most painful things I’ve ever gone through.  I have NEVER cried so hard in my life.  I have NEVER drank so much and I have NEVER acted so incredibly insane, ever!  It reminds me a little of the song, “Mama’s broken heart.”

After the breakup, I was so incredibly sad because I felt like I had lost my best friend.  I was angry at myself because I felt that I hadn’t appreciated what I had – until I lost it.  I had intentionally become distant with him towards the end of the relationship, because I didn’t feel complete; I felt like I could live without him.  The problem was, the second we broke up … I THOUGHT I couldn’t possibly live without him!

The truth is… He was a comfortable relationship, and I just felt like a kid who had her blankie taken away.

While we were together, some things felt right in our relationship, but in a lot of ways, I had grown past him.  One of the tell-tale signs was that throughout the whole relationship I had trouble imagining myself marrying him, and if I did imagine it, I would picture it really farrrrr down the road.

My ex was great to me.  We were best friends, traveled together, laughed together, and did everything together.  We had so much in common, and we both loved adventure.   He was very sweet and I can’t remember one time that we really ever fought… (Well, after the break-up we fought, but that’s only because break-ups make girls insane.) He was also close to my family; he spent a lot of time talking with my mom, he became a part of my family and I became a part of his.

Almost every memory of college involves him.  We were happy, but problem was, I constantly thought about someone I dated for a short while before him.  I felt like there was unfinished business.  The inner turmoil made it very hard for me to take our relationship seriously, rendering it impossible to think about the future with him.

Erin, it may be hard to believe it now, but you’ve gotta trust your gut feeling.  If you felt a need to break it off, maybe there should be a break.  A guy can seem perfect, but at the same time, he may not be perfect for you. My ex was not right for me.  He was perfect in so many ways, and it broke my heart to say goodbye to him.  Even a year after we broke up, I thought about him constantly.  I would tell myself I made a big mistake.  But, what’s crazy, the moment I met my husband I barely ever thought of him again.

His memories will always be there, but the pain subsided with the realization that there was a purpose in it all.  What I came to realize is that my ex was like the perfect home except that something was missing… let’s call it the fireplace.  However, after meeting my husband, I found the absolutely perfect home, fireplace and all! In the past, I seriously never really thought about marriage.  I mean, I knew I would get married, but with my ex, I never imagined walking down the aisle towards him, and I definitely never counted the days until a ring was on my finger.

When you have doubts in a relationship, it’s typically because something is missing.  Breakups are hard, but for now…. let him go!  If you’re meant to be with him, God will bring your two paths back together at a later time. But for now, work on yourself, join a bible study group, and get happy again. There’s a reason for everything, you may not see it now, but you will later on.

Another idea:  If you had any doubts in your relationship, take the time to think about what they were and make a list.  It’s important to know this so you don’t make the same mistake twice, and it helps to clarify your decision.  It took some time, but I know now why my ex and I didn’t work out.  There were issues, (deal breakers) I couldn’t get past.

Here were my issues:

1.  He called himself a “Catholic,” but he didn’t have a relationship with God.

2.  He caused me to stray away from God.

3.  He had to be told to do almost everything.  He was incredibly intelligent, he just never pushed himself.  He was so used to having his mother push him that it made it impossible for him to push himself.  It made it very hard for me to respect him.

4.  He was spoiled growing up and automatically assumed the world would fall into his hands.